Voices of people in need

Can you imagine sleeping in the woods for eight years running? Or living in your car and lacking the money to give your children basic necessities like warm blankets, new shoes and enough to eat?
A few of us at Simple Needs GA recently met at MUST Ministries to talk with some of our clients–people who are facing daunting challenges such as these. Some had just checked into the shelter and were grateful to have received a duffel bag packed with full-sized toiletries and other useful items (SNGA donates about 1,000 bags a year). Others were living in the woods and making use of SNGA-donated tents, candles and sleeping bags, which several said had made a big difference in their lives. 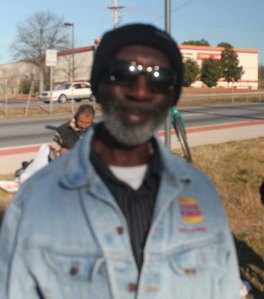 Michael, a 56-year-old Cherokee County native, described living in the woods off of Cobb Parkway for the past few months. Prior to getting a new tent from SNGA, he had been living in a tent with a huge hole in it. Cold and rainy nights had been tough, he said. “It makes a big difference to have a new tent,” Michael said. “It keeps you warm and keeps the rain off.”
Wearing a denim jacket with Burger King patches on the front and back, Michael talked about his uphill battle in trying to find a job. He said he would be thrilled to work at a fast-food restaurant like BK if he could only persuade a manager to hire him. Michael, who has been on the street for a year and a half, is attending classes at MUST’s educational center. “I’m trying to teach myself how to read,” he said. “I want to better myself.” Despite these difficulties, Michael grinned constantly and was friendly and talkative. He chatted with one person after another before heading across Cobb Parkway to his camp in the woods
Another conversation underscored the reality that homelessness affects both young and old. Anthony, 33, and Valerie, 26, also described living in the woods in a tent supplied by SNGA. Receiving a tent had been a big help, explained Valerie, whose experience with homelessness began in April 2012 after she lost her job in Mississippi. “For us, what it meant was, it was like we weren’t really homeless anymore,” she said. 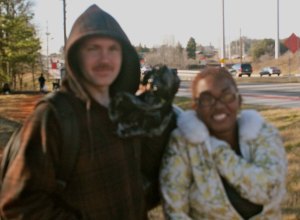 SNGA board member Kasey Litt was moved by the couple’s youth as much as their stories.  “Valerie took the lead,” Kasey said. “She spoke matter-of-factly about the circumstances they were in, as if their living conditions were as regular as getting dressed in the morning. Valerie walked with a cane and had some difficulty maneuvering the muddy grass where we were standing. Tony stood quietly in the background carrying a large trash bag that held all of their possessions. He comes from Mississippi and does not know anybody here except for Valerie. As I was taking pictures I could not help but feel that these were babies pushed out of the nest way too early. I wondered what their dreams were…maybe it was just to have someplace out of the cold.”

While SNGA board member Kevin Powell was glad to hear of the good things being done for Grady, Rhonda and Billy, he was also touched by the circumstances of their lives. “Grady, who was about 40 years old, had been living in his tent for three months about a quarter of a mile away from MUST,” Kevin recalled. “He said he was doing OK, but that he could really use one or two more blankets, and he sure could use some additional food. It was his birthday. He just seemed happy to be alive.

“Rhonda was married with two teenage boys, ages 13 and 14. She talked about how her two children are staying with friends for shelter while she and her husband live in their car. They were in need of two sleeping bags to make their lives more bearable. Rhonda has applied for disability due to her heart condition. She described how her 13-year-old has a learning disability and needs new shoes.

“Billy had been living in tents since 2005. He has done odd jobs at restaurants over the years but always finds a way of losing his job. He is in dire need of dental work and fears for infections coming into his bloodstream from his bad teeth. His spirits seemed good, but one can only imagine the hardships he faces, being locked in the cycle of homelessness for this long.”

Thanks to the generosity and compassion of our donors and volunteers, SNGA has been able to lighten the burden of hundreds of individuals, children and families over the past couple of years, and we’re eager to do more. Thanks so much for your help! All contributions to our 501(c) 3 nonprofit are tax-deductible. Any support is greatly appreciated! Please consider donating online or mailing a check to:

Thanks for your support of people in need!