‘Bleacher Creature’ Pitches in for People in Need

Before Alan Stensland engineered bridges and buildings and helped the U.S. government plan for disasters, he played a fuzzy green monster adored by millions.

Alan was the Atlanta Braves’ “Bleacher Creature” mascot from 1976 to 1979. He went on to study civil engineering at Georgia Tech and worked for the U.S. Forest Service and the FAA. 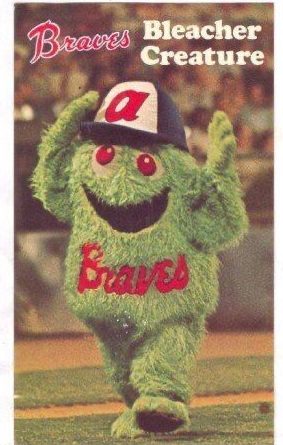 These days, the 61-year-old puts his engineering skills—and his blue pickup truck—to good use on behalf of Simple Needs GA. Alan has fixed furniture, diagnosed broken light fixtures, and spent Saturdays picking up donations and delivering them to our Simple Household Needs clients.

“Alan has pitched in a lot at crunch time and is happy to help our clients in emergency situations,” said Brenda Rhodes, SNGA president and founder. “He also clearly enjoys working with and assisting the guys we hire for labor in our furniture program. He has been an invaluable volunteer.”

The Kennesaw resident found out about SNGA through his wife, Susan, who is the executive director of the Georgia Symphony Orchestra Chorus (Brenda sings in the chorus; Susan and members of the GSO board have worked with Brenda on SNGA donation drives and volunteering projects).

Alan began volunteering with SNGA three years ago but ramped up his time after he received the truck for his 60th birthday. “Anybody with a truck had better watch out, or we’ll rope them in!” Brenda said.

One of Alan’s first contributions to SNGA involved using his self-described “engineer gene.” Having heard Brenda mention problems with some light fixtures at our Marietta warehouse, Alan took them home and dismantled them. “The bulbs were blown, and then the charging logic boards were burned out on a couple of them,” he said. “I just went to Batteries & Bulbs and picked up some replacement fixtures for about $30. Hiring a contractor would have been a lot more expensive.”

Alan grew up in Forest Park and went to Forest Park High School. He earned his Eagle Scout rank in 1971 from Troop 909 in Jonesboro and has volunteered with the Scouts for nearly 30 years. Alan received the Scouts’ Silver Beaver Award for distinguished service to young people within a BSA local council.

During his senior year, Alan took a job as an usher for the Braves. That, in turn, led to his stint as the fuzzy green monster. “They needed somebody to be the Bleacher Creature and I was selected,” he said. “It was a hoot.” 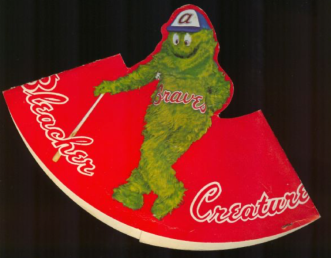 Before Alan knew it, his seventh inning-stretch antics at Atlanta Fulton County Stadium were being broadcast to millions of people from across the Southeast via Ted Turner’s Channel 17 UHF station and various TV syndication partners. The job put Alan in regular contact with legendary Braves players and coaches like Dale Murphy and Glenn Hubbard.

He even had a run-in of sorts with Ted Turner himself.

Having already performed as the Bleacher Creature during one home game, Alan was doing homework when Turner burst into the upstairs room at the stadium. “Ted comes through having a personal earthquake, and he looks at me and goes, ‘What are you doing, integral calculus?’ I looked down and said, ‘Well, as a matter of fact, I am.’ Turner walks over, picks up my book upside-down, looks at it, and says ‘Well, I’ll be!’ He just dropped the book and kept on going.”

Over the course of his civil-engineering career, Alan’s achievements included designing many buildings and bridges and developing the disaster-response methodology that is still in use today at the FAA. “I’m being hired as a consultant now and have two subcontracts as a senior engineer,” he said. “Today’s companies really value engineers with hands-on experience at solving problems.”

Our Simple Household Needs program periodically hires residents of the The Extension recovery program and the MUST Ministries Elizabeth Inn Homeless Shelter. Alan enjoys seeing the joy these men feel when they bring furniture to families that are having a tough time.

“They’re helping the people who need the furniture and it is just amazing,” Alan said. “The guys from the Extension are just so happy to be contributing and helping people. I like seeing those ripple effects. I also like being able to help a segment of the population that I don’t have a lot of exposure to.”

Alan has his own take on the mission of Simple Household Needs: “What I said to Brenda was that some people have stuff they don’t need, and others need stuff they don’t have. Our job is to bridge the gap.”

One thought on “‘Bleacher Creature’ Pitches in for People in Need”